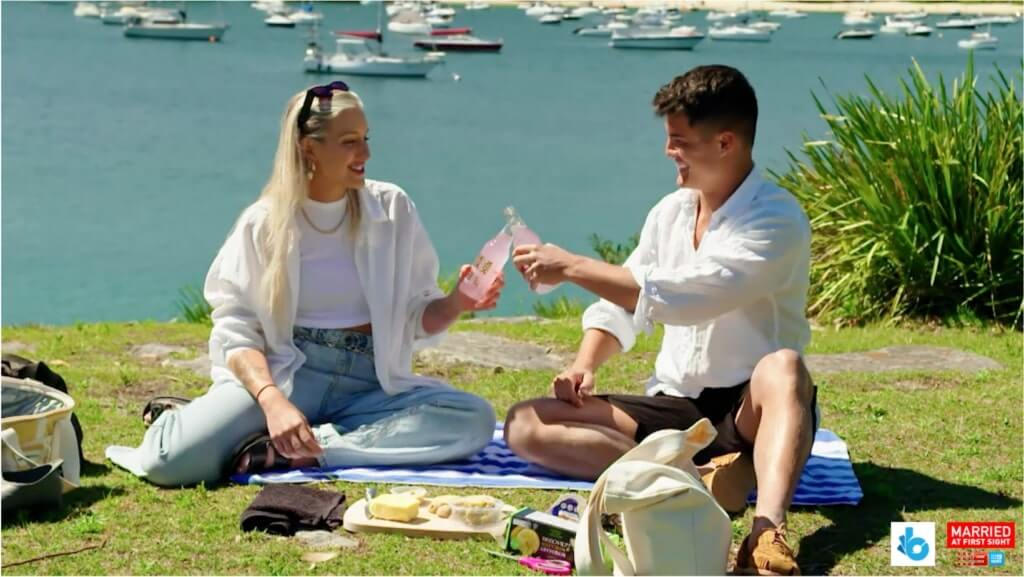 Not sure there’s too many people that would want to be in Domenica’s position right now. What started off as wholesome family visits, quickly turned into a Salem Witch Trial on MAFS last week.

We’ve got a lot to cover so let’s take a look at our predictions for week 8:

Olivia and Jacksons relationship will crumble

Jackson and Olivia have coasted through the series so far, seemingly unphased.

But this week, their relationship has started to show cracks as Jackson has seen a side to Olivia he wasn’t the fondest of.

Home stay week was a chance for Olivia to redeem herself and show Jackson that she could put the snarky attitude behind her. But when Olivia met Jacksons friends, she couldn’t wait 5 minutes before mentioning her BFF Domenica and how much she despises her.

Whilst we were screaming at our TV begging Olivia to stop talking, she continued to dig herself a hole by telling Jacksons friends an oh-so-funny story about her ruining a friendship by cutting up a bridesmaid’s dress because she didn’t like the colour (a completely reasonable thing to do obviously).

After Olivia’s continual bad behaviour at the dinner party this week, we think the seams of this relationship will continue to rip in week 8.

Jack and Dom will continue to thrive

Jack might be the man of our dreams. Watching him support Domenica could melt even the coldest of hearts.

Whilst we all live for the MAFS drama, it is refreshing to watch a couple actually thrive in the experiment and support each other unconditionally (maybe the experts actually do know what they’re doing?).

Dom was the centre of a nude photo scandal this week, after one of her fellow contestants (do we even have to tell you who?) accessed her onlyfans and spread the photo around. Olivia is definitely not judging Dom, but she is making sure the whole cast (including John Aiken probably) and nation know about it- but remember she’s NOT JUDGING.

We respect Dom’s hustle, and we were so happy to see Jack stand by her side despite the criticism from the other couples.

We see this couple continuing to thrive next week, but we also predict that this scandal isn’t over and that the other contestants will get a good old-fashioned tongue-lashing at the commitment ceremony for their behaviour.

Anyone else confused by these guys after last week? Al majorly stitched up Sam by writing ‘stay’ at the last commitment ceremony, resulting in the couple spending another week together.

Al decided to take Sam (his mother) snorkelling in the ocean, followed by a picnic at the beach. We were honestly quite shocked that Al didn’t suggest building a sandcastle. They have a good time and conclude that they do have one thing in common- liking the beach. Oh my god the bar is on the FLOOR at this point.

With the commitment ceremony coming up, Al is blindly optimistic (this gives us real Gemini feels) and is convinced he has changed Sam’s mind. There you go ladies and gents- if you want to repair your crumbling relationship just take your partner to the beach and all your problems will just fade away!

But we aren’t so sure this is the case.  It appears that Sam just sees Al as a friend and is wanting to end their relationship on a positive note.

We predict that Sam will write leave, and Al will choose to stay- leading to another explosive argument at the commitment ceremony.

With only a couple weeks left in the experiment, now is crunch time for the couples! What do you think will happen at the last commitment ceremony? Who will choose to stay married? Which relationships will fall apart?

Catch up on last week’s episodes here, and jump on the Buddybet app now to start predicting with your friends!