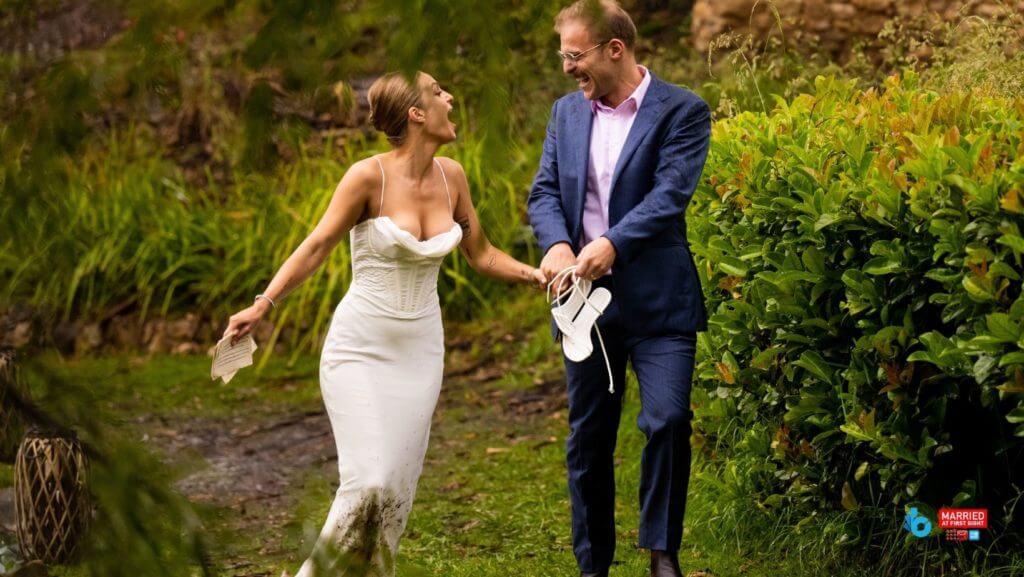 Can you believe the season is coming to close? Nine weeks have gone by in the blink of an eye, with only the MAFS reunion left to unfold.

Reunions are our favourite part of MAFS, with all the best drama of the season happening in those final episodes. Sticking a group of 20 people who hate each other in a room together – what could go wrong?

Here are our predictions for next week’s reunion gatherings:

Jack and Dom will announce they’ve broken up

Whilst we absolutely love this couple, we were quite shocked when Domenica revealed she wanted to continue her relationship with Jack.

She expressed her doubts about a future with him in the days leading up to the final vows, and has continually addressed her issues with their sex life (or should we say lack there-of).

Considering it took Dom swinging on a poll to finally get Jack’s libido rising, we predict this issue would have continued for the couple after the show ended.

Sadly, we think this couple is over.

There will be a Holly vs Olivia showdown

We already know they aren’t the best of friends after Olivia expressed her not so nice opinions of Holly’s relationship with Andrew. Remember guys, when Olivia gives her opinions it’s okay – just not okay for others to give theirs.

These ladies have never quite seen eye to eye, and now that Holly has learnt about Olivia leaking Dom’s nudes, we can’t see Holly biting her tongue at the reunion.

If we don’t see a Cardi B and Nicki Minaj-esque shoe-throwing level of argument between these two, then we don’t want it! Holly is an actor in real life, so we expect nothing less than an A-grade performance by her tonight.

Ella and Mitch will arrive together

Mitch left all of us wanting to smash our tv screens on Tuesday night, not giving Ella a definitive answer on whether he wished to continue their relationship.

Although is anyone really surprised? Mitch has had a hard time this season adjusting to the MAFS process – not wanting to open up to the experts or be filmed by the crew (a reminder that this is reality tv show Mitch signed up for). So, we can’t say we were completely shocked when he didn’t follow the process of the final vows by making a set decision.

With that being said, Ella expressed in her vows that she was willing to take the risk with this relationship and given this couple’s explosive chemistry – we can’t see them calling it quits just yet.

We see them walking into the dinner party hand-in-hand (or butt-in-hand) on Sunday with lots of gasps from their fellow participants to follow.

If anyone can give Tamara a run for her money when it comes to arguing – it’s Selin!

After witnessing these two argue at the girls’ night, we can’t see them giggling and exchanging friendship bracelets on Sunday.

Now that Brent and Tamara have called it quits, this is more ammunition for Selin. We think she will try and embarrass Tamara on Sunday. And if we know Tamara (which we absolutely do not), she will bite back.

The experts will absolutely roast Carolina and Daniel

This couple were arguably the most controversial of the season, after starting a full-blown affair that would shock Tiger Woods.

We think it’s fairly obvious they are going to be a target for the former couples at the dinner party. But can you imagine what the experts will have to say to them?

After taking little to no accountability for their impact on Dion, we can definitely see the experts reading them to filth for their behaviour.

This will be the final time the experts see Carolina and Daniel. We’re predicting an absolutely brutal tongue lashing to take place on Monday!

Have you enjoyed MAFS this season? What do you think will happen at the reunion? If you’re lagging behind, make sure to catch up on the season here. Jump on the Buddybet app now to make your final MAFS predictions of the year.