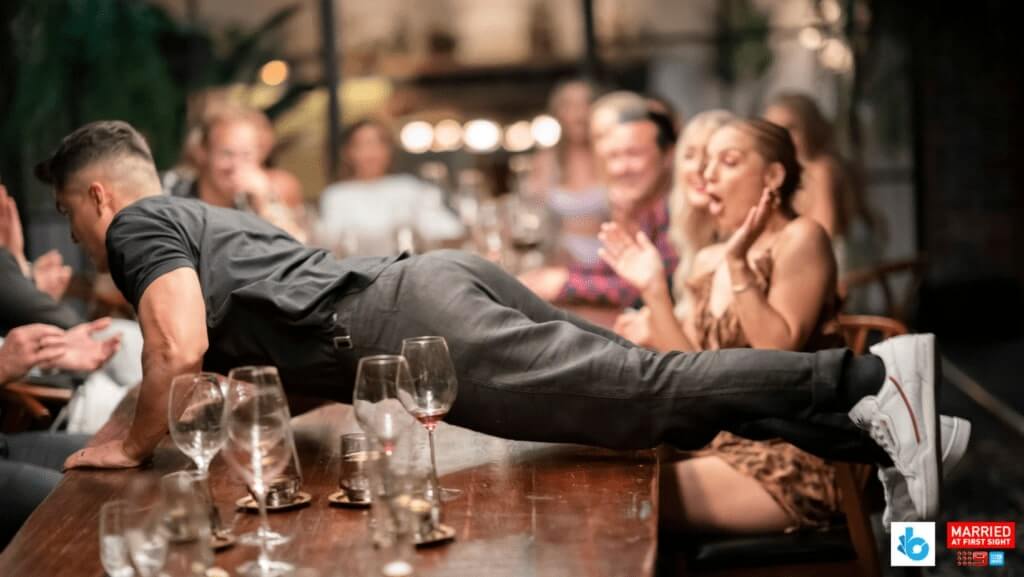 We are so gosh darn ready for MAFS week six after the heat that was thrown around at the dinner party. The drama seemed to follow Carolina like a bad smell, with poor Dion being ‘kicked from pillar to post’ the whole week leading into the dinner party.

These are our predictions for MAFS week six:

The last episode was an explosive one with zero recognisable signs of remorse from Carolina following her ‘secret’ (+ cameras) meeting with Daniel at the gym.

We have to say, Dion is not the only one who is ‘bamboozled’ by Carolina’s behaviour of late. She even said she is willing to explore her connection with Daniel, but when confronted by Dion at the dinner party, was unable to put an end to their relationship just yet.

According to Dion, Carolina didn’t want to go to Bondi Beach on the chance her Instagram followers would spot them.

Carolina was confused why he was hurt by that asking ‘Why do you keep saying I’m embarrassed?’ – Hmm, it may have something to do with saying you don’t want to be seen with him.

We get where she’s coming from. If you were to go on a first date with someone and they didn’t like doing any of the things you liked to do, you’d probably never see them again. Having said that, if you’re not ready to commit to the experiment, don’t apply. This makes it look like she’s in it for the Insta followers. Hope she proves us wrong!

Anyway, we think Carolina and Dion will stay at the commitment ceremony, and Carolina will have another ‘secret’ date with Daniel. Where though?

Dom will meddle in another relationship next week

We’re proud of Dom practicing restraint when speaking to Mitch about his concerns with the experiment (and subsequently Ella).

Dom is fiercely loyal, and she let that shine through in her reaction to Carolina’s behaviour. ‘Babe you’re not Beyonce’ is a term we will now use when our friends go a little too diva for our liking.

She’s not afraid to voice her opinions and call people out. So, we predict next week she’ll be doing her thing and getting confrontational with another couple over something she deems to be a ‘no no’. Which couple will it be though? Make your predictions here.

Kate will ‘Leave’, Matt will ‘Stay’

We think Matt envisioned a grand ol’ time at the dinner party after presenting Kate with two-week anniversary present (that was received similar to a pile of steaming sh**).

Kate deems there is still no chemistry between the pair – although Matt seems to be blissfully unaware of this.

Their argument at the dinner table gave us an insight into just how tired Kate is of not finding the one. From Matt’s point of view, Kate’s lack of effort is potentially the reason for this, which was met by a rather large eye-roll.

We think Kate will want to leave the experiment, but Matt will opt to stay. On the bright side for Kate, there’s a heap more anniversary presents coming her way.

Selina has convinced herself that both her and Cody have ‘put the past in the past’ (aka 5 days earlier). We’re not 100% buying it. We would love this pair to be happy, but the last episode it felt as though Selina was overcompensating. Selina can claim ‘couple goals’ ’til the cows come home, but we predict more trouble on the horizon for this pair in week six.

Thanks for reading. Keep up to date with our blogs here, and head over to the Buddybet app to make your predictions for MAFS week six!