Coachella Bets 2022: What Are Our Buddies Betting On?

Coachella season has finally arrived and we couldn’t be more excited to see our favourite celebs dress up in ridiculous outfits, and post a new brand deal every 10 minutes!

In all seriousness, Coachella is a hectic time in the entertainment world with everyone predicting who will show up with who, what everyone will be wearing and what special moments our headliners have in store for us.

Here’s what our Buddybet users have been betting on this Coachella season:

After Kanye announced that he was pulling out of Coachella, the internet erupted with rumours of which artist would be replacing him.

Whilst we were not-so-secretly hoping One Direction would make their big comeback on the Coachella stage, one of our users correctly predicted that his replacement would be The Weeknd! 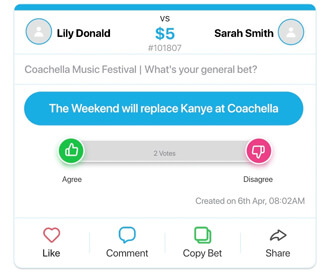 Given the Weeknd was already slated to play at Coachella, it would make sense for him to take Kanye’s place. The Weeknd and Kanye are rumoured to be quite good friends. We still think it’s possible Kanye will do the most Kanye thing ever and appear during the Weeknd’s set to perform their song ‘Hurricane’. FOMO is alive and well.

Whilst we are sad that our fantasy of Harry Styles being the first double headliner wont be taking place, we are excited to see what the Weeknd brings to the stage!

What songs our Coachella headliners will be playing has been a very popular topic on Buddybet as of late!

Bad Guy is one of Billie Eilish’s least depressing songs (sorry Billie we love you but your songs make us want to cry). One of our buddies has made very good prediction that it will be the song she closes with! 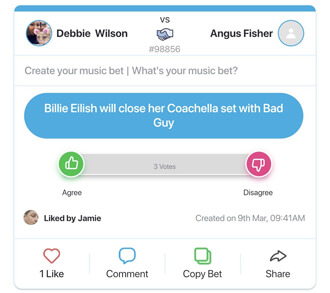 Going back to our Harry Styles/1D fantasy (is it too obvious we’re big fans?) we hope that this prediction comes true. Harry has not shied away from performing his old One Direction songs at his previous concerts. So, it’s not a bad guess that he will set everyone’s fan girl hearts on fire and perform ‘What Makes You Beautiful’ during his set. 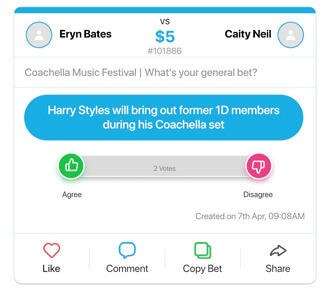 What songs do you think Harry and Billie will perform? Buddybet it now!

It is not unusual for Coachella headliners to bring out special guests to join them on stage! Ariana Grande previously brought out NSYNC and Nicki Minja. Beyonce even brought out Destiny’s Child!

Predictions of special guest performances have been popping up all over the Buddybet app. 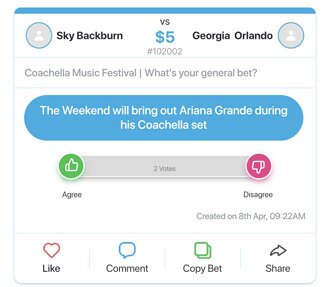 This user predicts that the Weeknd will bring out Ariana Grande during his performance! Considering the pair are great friends, this bet is not out of the realm of possibility! You could say that we will have to save our tears if these two do end up performing together!

What do you think will happen at Coachella this year? Do you think Rihanna will show up with her baby bump on show? Will Vanessa Hudgens remain the style queen of Coachella? What songs will your favourite artist be playing? Jump on the Buddybet app now to get your predictions in about everything Coachella.